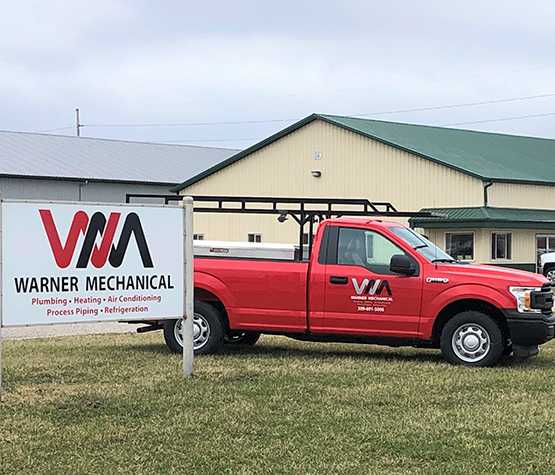 Welcome to Warner Mechanical. Located in Edwards, IL, serving all surrounding areas with plumbing, heating, air conditioning, medical gas, and process piping. We have been in this business for nearly 30 years. We’re a small business with a wide reach, specializing in healthcare, commercial and industrial work as well as residential.

September of 1991 Jim Rampy and Randy Warner started their business adventure as Rampy-Warner Plumbing Inc. The business was located in Peoria, Il where they continued until the move to East Peoria, Il in 1996.

Randy purchased the business from Jim in 2004 and continued in East Peoria.  Randy changed the name to Warner Plumbing Inc.  August of 2013 they expanded into the field of HVAC and Process Piping with the hiring of Jeff Frieden.   At that time the decision was made to purchase land with a larger building. The move to 9900 West Primrose Lane, Edwards, IL will allow for future endeavors.

In 2017 Randy made the decision to retire. Randy’s son Shane Warner and employee Jeff Frieden purchased the business and changed the name to Warner Mechanical LLC. Jeff took over the roll as President and Shane the Vice President. The two have proven themselves to be leaders, providing top of the line service to much of Illinois.

Building for the Future- Moved To Edwards, IL

Here at Warner Mechanical, we specialize in plumbing, air conditioning, heating, medical gas and process piping. Backed by nearly three decades of experience, you can lean on us to provide quality work with superior craftsmanship. We take great pride in our work. Come to us for the following services and more.